Showing posts with the label ISIS
Show All 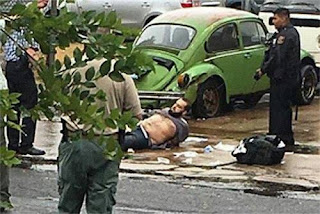 Lead suspect of the recent bomb attacks in New York City and New Jersey has been arrested in the town of Linden, New Jersey according to reports. The terror suspect, Ahmed Khan Rahami, is now in police custody following a shootout with police according to News Channel, CNN.According to the CNN correspondent, eyewitnesses in New Jersey found that Mr. Rahami was found sleeping “in a vestibule near a bar” which precipitated a shootout with police. Mr. Rahami has been taken to the hospital in an ambulance with unconfirmed bullet wounds.Law enforcement officials have said that a tip from the public lead to locating Mr. Rahami eventually leading to his arrest.Police are investigating Mr. Rahami’s connection to the detonation of a bomb in the Chelsea area of New York City, another unexploded pressure cooker bomb in Chelsea, and a pipe bomb in Elizabeth, New Jersey. Other reports have stated that Mr. Rahami may be part of a terror cell that has been activated in the New York-New Jersey area.
Post a comment
Read more
More posts